All of us were excited for January 5th, when we would learn what the new game would be. After a fun and informative day of workshops, socializing, and speculating, the moment we were all waiting for arrived, and the 2013 build season officially began! After the kickoff, we all went home to read the manual and think of ideas. The next day, we would go to a brainstorming session with our friends on Team 869, Power Cord. After considering a wide variety of ideas, strategies, and designs, we eventually decided to build a robot that would focus on climbing the pyramid more than shooting the discs.

(Discs? What am I talking about?)

The next few weeks were all about making that idea into reality. We knew we had to climb the pyramid; the next step was figuring out how. As time went on, we spent our build sessions thinking, prototyping, and measuring. We decided that we would climb up the edge (rather than the face) of the pyramid, and we designed a system of hooks and other mechanisms that will allow us to do just that.

All things considered, the time since kickoff was very busy, but very productive. Team 3637 looks forward to competing, and all of its members are determined to make the best robot we can! 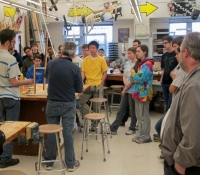