Team 3637 started with only a dozen students and three mentors in a garage in the 2010-2011 season. Since this time, both our team and the landscape of the STEM curriculum at our school has been transformed. The success of our team led to the creation and addition of a new robotics class and dedicated robotics classroom, which also serves as our workspace. Every year we have had an increase in membership, outreach, and achievement, helping us become a more competitive robotics team and a more effective ambassador of FIRST ® and STEM.

The Daleks blasted off into competition in the 2018-2019 season with the continued success of our two FLL teams as well as the addition of a third FLL team. During the season we continued our outreach into the community by showcasing our robot at the 4-H Fair, Community Day, Hunterdon Central’s Family Science Night, and a Stangl Factory Farmers Market Showcase. Team 3637 is proud to have completed over 1500 hours of outreach as a team.

During the competition season, we competed at Bridgewater, Montgomery, and the Mid-Atlantic District Championship at Lehigh University. At Bridgewater, we won the “District Engineering Inspiration Award.” At Montgomery, we were a “District Event Finalist.” We also won the “District Chairman’s Award,” as well as the “Safety Award sponsored by Underwriters Laboratories.” Our team is incredibly honored to have won these awards and continue to work hard to improve all aspects of our team for future years.

The Daleks began pre-season with the continued success of our two FIRST LEGO League teams while also starting two FLL JR. teams, one FLL team in India and one in Boston. During pre-season, we made our second appearance with the robot at the 4H Fair, NJ State Fair, and Community Day, as well as held our inaugural Girl Scouts in STEM event. In addition to working hard on our competition robot, we completed over 1300 volunteer hours by the end of the year.  We were honored to be awarded the Chairman’s Award at the Montgomery Competition which recognized our work as a team over the past 5 years. We were also awarded the Engineering Inspiration Award at both the Bridgewater competition and the Mid- Atlantic District Championship in Lehigh. With this the award, we were sponsored by NASA to attend the FIRST Worlds Championship in Detroit, making memories that we will all cherish for a lifetime! 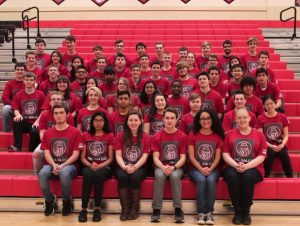 STEAMWORKS got off to a great start with the continued success of our two FIRST LEGO League teams. During pre-season, we showcased our robot at the 4H Fair, Community Day, and the Chamber of Commerce Business Expo. Shortly before kickoff, we were honored to be named as a national runner-up for the Safety Animation Award. Also as a team, we completed over 1000 robotics outreach hours by the end of the year.

During the competition season we competed at Bridgewater, Montgomery, and the Mid-Atlantic District Championship at Lehigh University. We flew our way to the playoffs in both of our qualifying events. At Bridgewater, we won “District Event Finalist” and the “Creativity Award” sponsored by Xerox. At Montgomery, we won the “Imagery Award” in honor of Jack Kamen. Finally in the Mid-Atlantic District Championship, Our hard work warranted us the “Creativity Award” once again. Our team is incredibly honored to have won these awards and continue to work hard to improve all aspects of our team for future years. 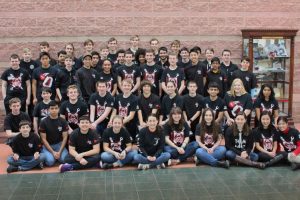 The Daleks catapulted into the 2015-2016 season. At the district competitions at Mount Olive and Montgomery High Schools, we ranked #3 and #2 respectively. The team qualified for the District competition for the second year in a row and attended the World Championships for the first time ever, where we won a Hard Hat Safety Pin. The team won the Imagery Award in honor of Jack Kamen at Mount Olive, and the Industrial Safety Award sponsored by Underwriters Laboratories at both Montgomery and the District Championships.

The Daleks increased their outreach efforts in the fall of 2015 by forming and mentoring two FLL®  (FIRST® LEGO® League) teams in Hunterdon County. We maintained our work with two of the local elementary schools’ LEGO clubs, tutored at the Family Success Center, as well as participated in Relay for Life. Our presence in the community became stronger than ever, and by extension, so did the vision of FIRST® .

In 2015, the Daleks shined even brighter. We advanced to District Championships for the first time since 2012, and we were also Finalists in a District Event for the first time in team history. We expanded our scouting team and created a scouting app for use by our team members in the stands, which syncs to our new custom pit server. Our great successes were due to many factors, one of which was Hunterdon Central’s brand-new Robotics workroom. Team 3637’s successes went beyond the technical aspects. Our outreach efforts expanded to new levels—some activities included running Robotics workshops at the county library and Family Success Center, assisting the LEGO Club at both Desmares and Barley Sheaf Elementary School, and forming a successful “Relay for Life” team. 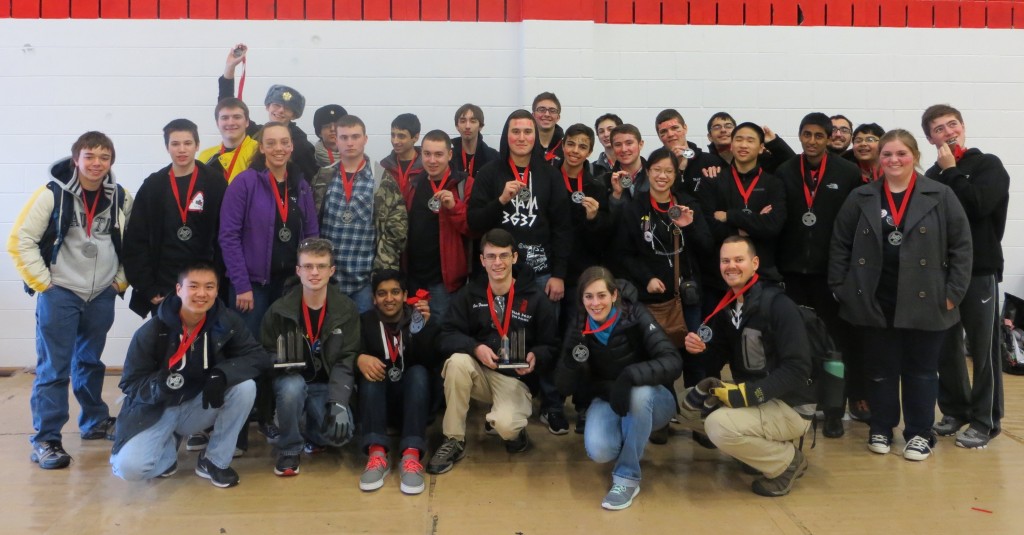 Team 3637 dove head first into the 2013-2014 season, and accomplished many feats. The Daleks made their first primarily offensive robot in less than six weeks’ time, grew to a total of 45 members, and got a robotics class added to the Hunterdon Central curriculum. We competed in two Mid-Atlantic District Competitions, held at Mount Olive High School and Bridgewater- Raritan High School, and won the Chrysler Team Spirit Award at Mount Olive for our work in the community and overall team spirit. The team developed greatly in their skills and relationships. 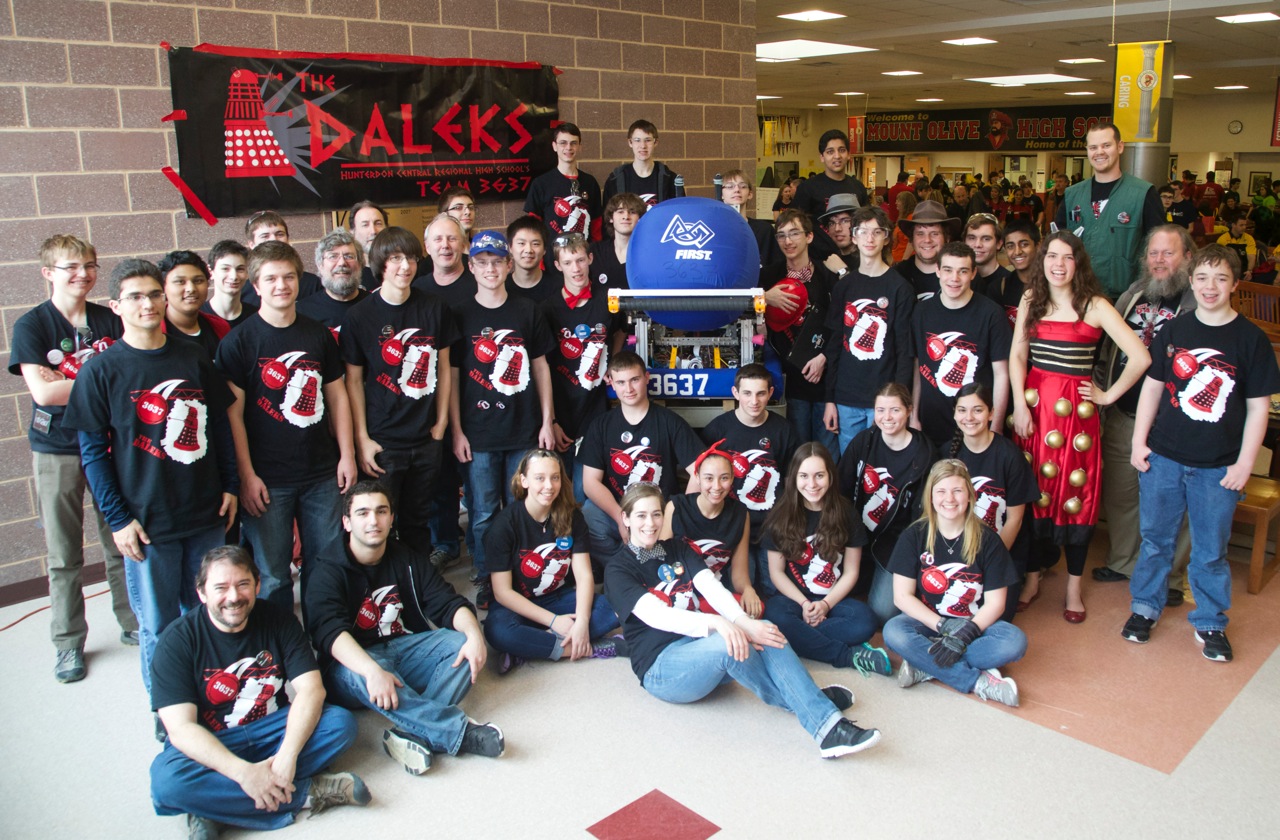 The Daleks entered 2013 determined to try new things and reach new heights in the process. Our experimentation included a focus on the endgame challenge, a partnership with Team 869, and pre-season workshops in anticipation of the build season. While we didn’t make it to the District Championships, we did achieve an impressive 30-point climb, and for our optimism and perseverance in the face of our many challenges, we brought home the Gracious Professionalism® award at the Bridgewater-Raritan District Competition. As in previous years, Team 3637 continued to grow, both in knowledge and experience as well as in membership. 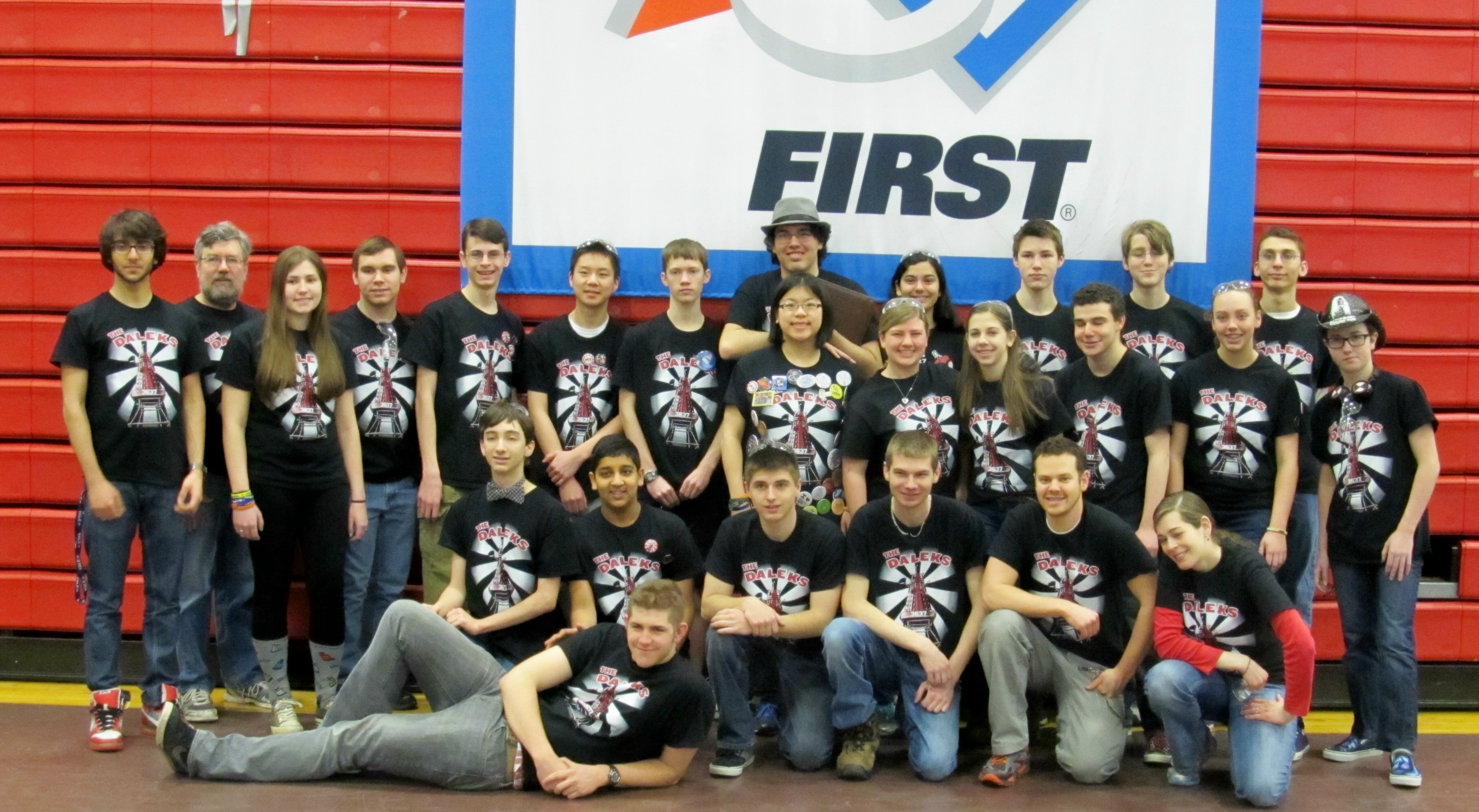 A larger organization than it had been in 2011, the Daleks reached new heights and new achievements. For the first time, we ranked in the top 50 teams after our first two competitions, qualifying to go to the MAR District Championships in Philadelphia. We also competed in our first off-season event (Brunswick Eruption), and were members of the winning alliance with Team 341 and Team 25.

During our rookie season, we competed at the New Jersey Regional in Trenton. After winning a “Rookie Inspiration Award” in this initial season, the team realized that it needed access to a fully outfitted workspace and lobbied successfully to work out of a shop classroom at Central during the nights and weekends of build season. This initial success was the beginning of engineering and STEM extracurricular activities being offered at our high school. 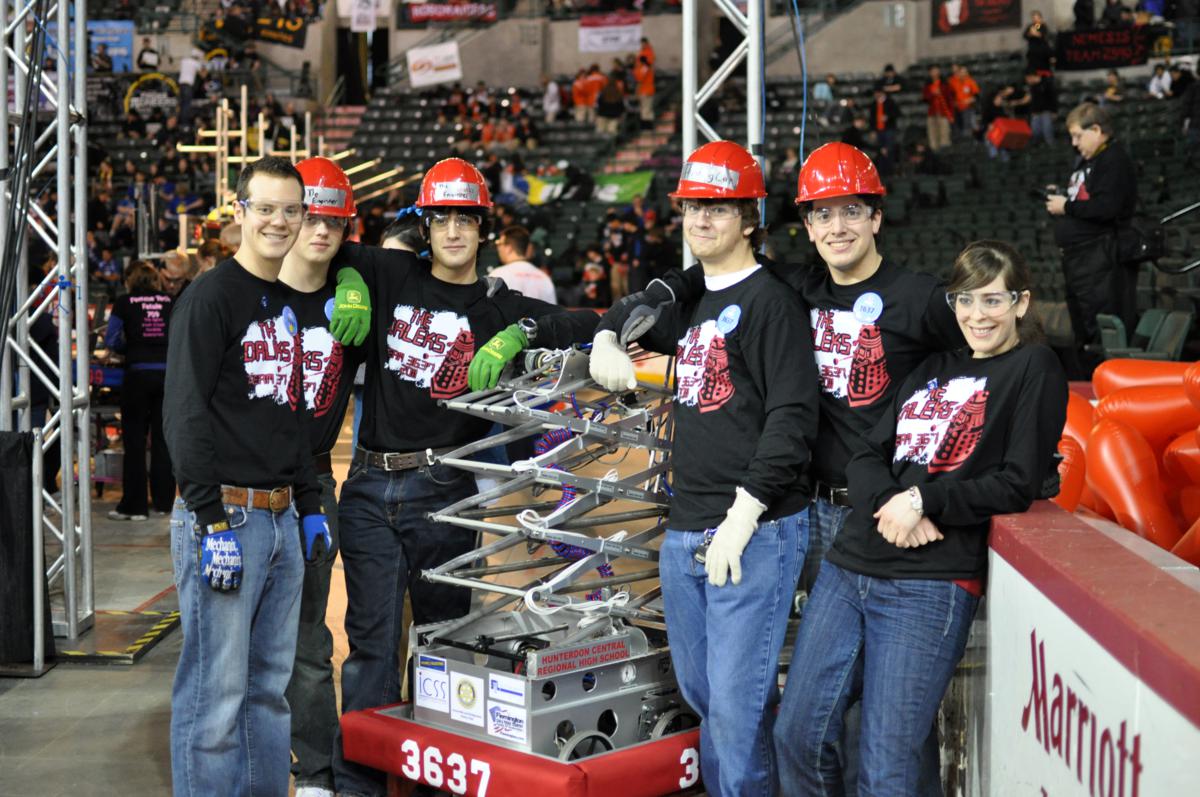 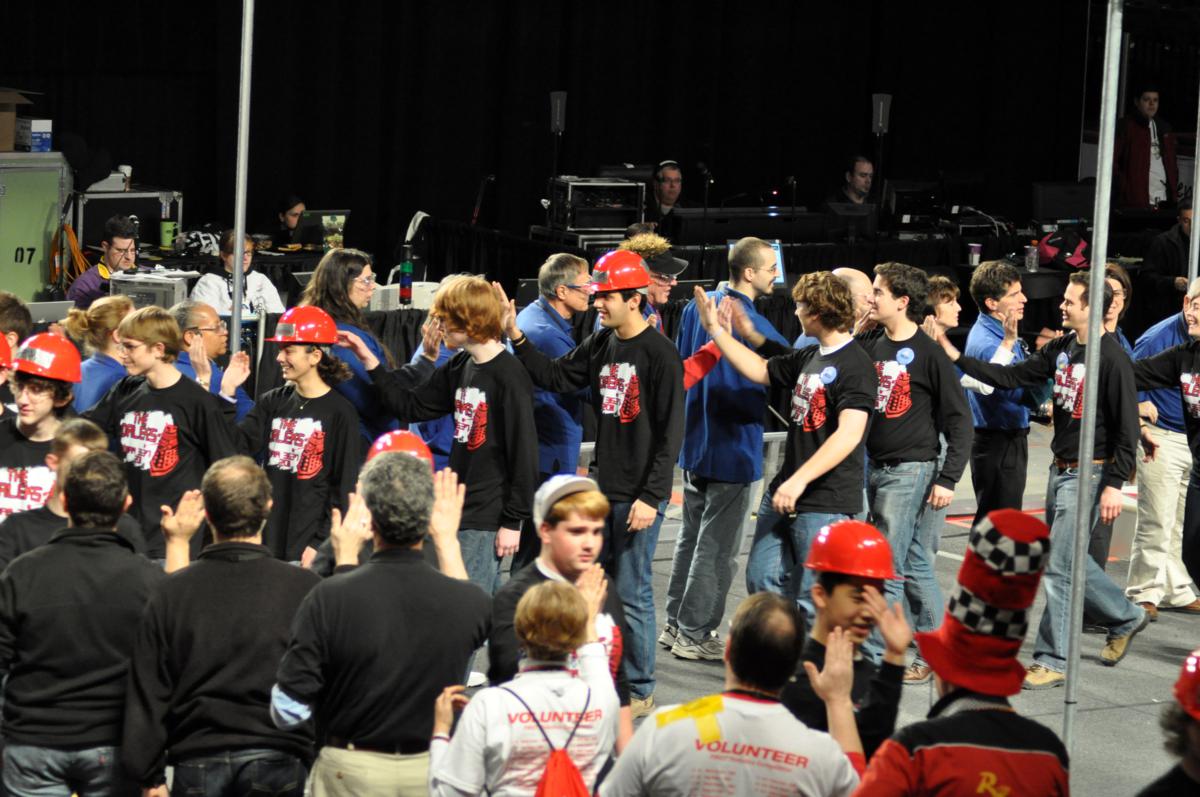